No other question is more frequently asked in the solar industry than “how long until it’s paid off”. This is a very fair question! Your family is busy in many ways and always thinking about the bottom line. At the same time as humans we tend to be more keen on doing anything if there is a financial benefit. Who would go to a job 5 days a week for 8 hours a day without knowing you would be receiving a paycheque? Furthermore, who would invest that hard earned money unless there is a healthy growth over the long term. How does solar power play a role in any of this you ask? What is our incentive to switch to solar generated power? Are there other ways of gaining from installing a PV system in our homes or businesses?……we all know the phrase “perspective is everything”? So let’s look at this from a whole different angle! Let’s answer these question for you. Let’s take a closer, more inspiring look. Enter for arguments sake we follow twin brothers. In our story these brothers do and have everything the same. Same exact house, same exact wage, and even the same exact monthly electricity usage. In fact the ONLY difference is one twin decided to install a solar system on his house, let’s call him Jim. Whereas the other twin, let’s call him Bob, chose to continue paying for electricity each month from the grid.

The only other factor to involve would be inflation, how does that have an effect?

Now let’s look at how well Jim has made out in the past 30 years. Remember our story is the exact same so after 30 years Jim has now saved roughly $60,000. If Jim used a loan to pay for the system it has been paid off long ago and there is still many years left in the PV system. Let’s get even more interesting!! Jim has decided he wants to do something with the money he is saving each month. He decides to put the money he was saving into his RRSP. Every year come tax season he would then receive a tax return of 30% if the money was directed into an RRSP. Jim would take this tax return, the one he received from savings on savings, and then put it into his TFSA (another form of savings). By doing so he could grow his savings by 130%. Then by using the 130% increase and using a fund that gave him a 7% growth over the 30 year period, Jim was able to build his RRSP account to about $160,000 and his TFSA to about about $50,000 for a total of about $210,000…….quite a swing from his brother Bob who has paid about $60,000 to the power companies over those years.

With the total spread of $270,000 between Jim and Bob, you can see there is huge power in reducing your electricity bills. They each spent the same amount of money every month. However, one brother was able to come out hundreds of thousands of dollars ahead.

With solar power being available to nearly every home owner and the products having had major strides in development in terms of efficiency, aesthetics and ease of use, all you need to do is make this easy choice. Be a Jim, create a trifecta of positivity for your family; reduce your carbon footprint, get rid of those monthly bills and create an extremely healthy nest egg for your future. Sol West Power is able and ready to help your family with every aspect of this plan. From solar PV installation, assisting with loan applications, to the investment angle we just went through in this story. This is just one way of looking at how saving money on bills can actually become a savings on top of a savings. This perspective demonstrates how we don’t all have to be stuck paying our monthly bills. 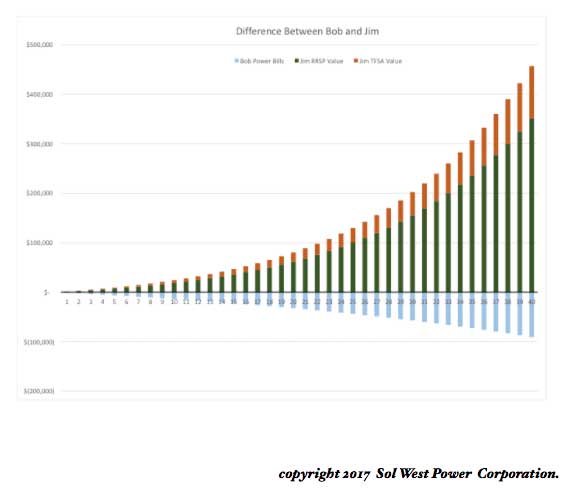